Please fill in the form below and we will get back to you as soon as there is a spot which frees up.

We have added you to our waiting list and you will be contacted as soon as a ticket becomes available.

Back to ticket listing 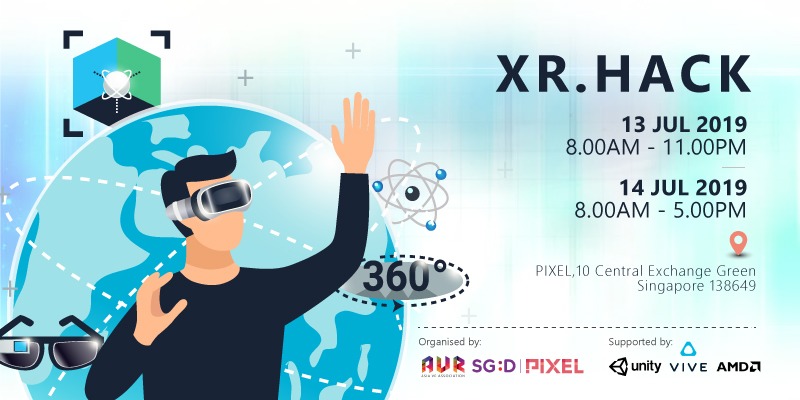 XR.Hack is an XR developer event, organised by AsiaVR Association and IMDA. Held in Singapore, it aims to foster a vibrant community of XR developers and companies.
It will include a host of workshops, equipment demos and hands-on with new and popular VR/AR headsets and controllers to let developers experiment and envision future possibilities. This will lead up to a hackathon where you can try developing with these new technologies and stand to win attractive prizes. The event will also provide opportunities for mutual learning and networking.

Targeted at local and regional content producers and developers who have an interest in VR/AR/MR, AsiaVR and PIXEL intend to use this event to grow the ecosystem in Singapore as well as foster partnerships in the region.

2016 was the year where XR headsets became more readily available. With the launch of the HTC Vive and Oculus Rift CV1 as well as Hololens, developers and enthusiasts alike could get their hands on XR headsets. In 2018 and 2019, with the release of the new HTC Vive Pro/Pro Eye, Rift S, Pimax, Valve Index, a new generation (or 0.5 gen) of PC Tethered VR headset are now available to upgrade to get features like wireless, eye-tracking, better displays, hand-tracking and pressure sensing controllers, etc.

There are also a new class of headsets for Standalone VR that is poised to take over the mobile VR class. Vive Focus, Mirage Solo, Oculus Go and Quest are the ones leading this new class to expand the user base from the early adopters to the mass, with an easier and cheaper entry point.

AR has seen Facebook’s Spark AR, Apple’s ARKit and Google’s ARCore being updated frequently to enable more features on the mobile platform. For AR headsets, Magic Leap and Hololens 2 continue to push the boundary on the forefront of merging virtual and reality.
With new inputs and form factor, the possibilities of what can be created in the XR metaverse is expanded and XR.Hack aims to enable developers and companies see beyond what has been done and gaze into the future.

Teams of 3-5 have to create an XR demo during the hackathon time period that showcases how the new inputs and form factor of 2018 and 2019 can bring a transformative experience to XR use cases.

Stand to win attractive prizes including Unity licenses, code reviews and flight + accomodation for 3 to participate in the Global VR Hackathon in Shanghai. Stay tuned for more information on prizes!

Judging will be based on the following factors: (1) Creativity, (2) Transformative, (3) Usability in applying new features to the VR/AR experience.

PIXEL
Your name:
Your email:
Your message:
Close
Sending...

We have sent this email to the organizer.